What is that one important rule of negotiation?

I posed this question to several of my organized labor colleagues who make their living negotiating contracts and fighting for better wages, conditions, health care and pensions for their members. 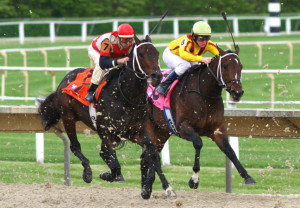 When negotiations stall, head to the horse races.

They are seasoned veterans who are committed to doing right by the people they represent and could teach a Wall Street lawyer a thing or two.

Not surprisingly, I received a wide range of answers.

Conny Ford, Secretary-Treasurer of the Office and Professional Employees International Union, Local 3 (San Francisco) listens to her union members and their needs before developing her negotiating strategy. Every bargaining session is informed by this process.

“You may think it’s always about the money, but that’s not necessarily so,” she says. “For example, preserving seniority became a key contract issue for us awhile back.”

Gunnar Lundeberg, the pro at the helm of the Sailors’ Union of the Pacific, bargains for sailors who work in the deck, engine and steward’s departments in U.S.-flag vessels. Gunnar takes a global view of negotiations because he has to.

“Every shipping company we deal with is different and is impacted by global competition,” he says.

The Golden Rule of Labor Negotiation

I have a few rules for labor union negotiations that I will discuss in the coming weeks, but one of my most important rules is this:

Make sure the decision-maker for the other side is at the table.

Larry Mazzola, Sr., recently retired after more than five decades with the Plumber’s Union, Local 38, told me a story where the employer put this rule to the test.

Early in Larry’s career, he and his father Joe were in contract negotiations when they learned that the employer representative was not empowered to make the decision. Joe asked for a caucus and left the table with his son for the horse races. As he told Larry later, he didn’t want to waste the rest of the day.

“I want to sit across the table from the one who makes the deal, “says Larry. “Sometimes it can be hard, sometimes it’s easier, but you want to know that your counterpart can make a deal.”

If you’re leading a labor union, negotiations are one of several items on your ”to do” list during the course of a day. You don’t have the luxury of whiling away the hours talking to someone who can’t make a decision.

You would be surprised how many employers don’t respect this basic protocol.

So don’t waste your time if the dealmaker is not at the table. Place your bet on the horses instead.

How to Manage Employer Disputes and Duplicity