Last year, I ran for San Francisco District Supervisor in a crowded field of nine candidates and lost by 132 votes out of 35,351 votes cast. I would be less than truthful if I told you I wasn’t disappointed. But my campaign experience also opened my eyes to new possibilities for organized labor to take a more active role in our democracy.

Here’s why more labor union leaders should run for office. 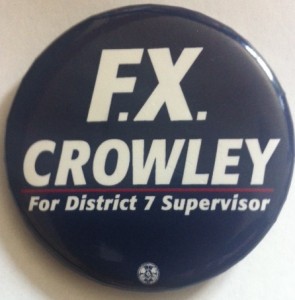 1) Put a Face on Organized Labor.

As a 35-year member of the International Alliance of Theatrical Stage Employees (IATSE) and the former seven-term elected Business Manager of IATSE Local 16, my roots in labor run deep. I have been a member of the San Francisco Labor Council executive board since 1994 and am involved with various labor organizations.

At the same time, I am not defined exclusively by my career in labor. I ran for Supervisor in a district where I grew up and still live, and where my wife and my children have done the same. We are active in our neighborhood, our church, our schools and our city.

While I drew tremendous support from the labor movement, voters outside of labor also cast their ballots for me because they knew me, trusted me and believed I would do a good job for them. Many voters also met me for the first time when I rang their doorbell or attended their meeting.  They learned that I didn’t fit the media stereotype of a union boss.

Even in San Francisco, a city friendly to organized labor, stereotypes prevail. Need an example. One voter said to me, “You’re not like a union guy. You’re like the police and firemen I know.” Stereotype or ignorance, the voter’s comment shows we had work to do.

Running for office takes you from behind the curtain to center stage. And it’s a risk. It’s open season for anyone you may have locked horns during your career and let’s face it, you can’t be a good union leader without doing battle on most days.

But it’s also a chance for voters to see us as real people who share common interests and challenges. That’s what happened to me. Voters appreciated my career as a labor leader, but also my roles as a lifelong resident of District 7, City Commissioner, homeowner, taxpayer, father, husband, neighbor, coach, schoolmate and friend.

When I ran for office, I put a face on unions and so can other labor union leaders.

If we’re savvy local union leaders, we’ve been contributing to candidates and politicians who we believe support our values. Candidates need us during political campaigns, but once they’re elected, the balance of power shifts to them and it’s a whole new ballgame. They decide whether to introduce an increase in the minimum wage or if it’s politically convenient to push for health care reform. Sometimes it’s not, even though those same politicians who we walked precincts for and donated money tell us they’re on our side.

Labor spends an awful lot of money on political candidates and should have more direct representation. I think we’d see better results and more opportunities to control our message if union members had a seat in government.

Organized labor needs to find more ways to build alliances with individuals and groups who would appear to be on the opposite side of our issues. Business, environmental groups, and faith-based organizations are a few that come to mind.

As negotiators, we are conditioned to find common ground and forge solutions. If more labor folks were on the inside of government instead of just outside, I believe gridlock in government would end.

We bring a special skill set to democracy, which includes negotiating, team building and meeting management. As active members of government, labor union leaders would build many more bridges, expand our opportunities to grow, and create an environment of mutual respect and trust.

What We Can Do

Look at your union’s officers, executive board and committee members, Labor Council, state federation and AFL-CIO delegates. Are they connected to groups outside of labor? Can they build coalitions? Are they and your union committed to promoting their leadership skills in a campaign for elected office?

Keep in mind that running for office takes time and money. About half way through my campaign, I realized that I could not serve both the members of IATSE Local 16 and campaign for votes so I stepped down from my paying job. I had not anticipated doing so and agonized over this decision.

But my Local 16 brothers and sisters eased my transition by giving me a generous severance package to help me through the end of the year. More unions, trade and local labor councils should consider this option to help a brother or sister meet the goal of elected office because it serves everyone.

Union members should not run on a “union” ticket. To be successful, they have to be part of the greater world which can include civic and neighborhood responsibilities, church and school positions, local Democratic clubs, as well as non-profit organizations.

If labor union leaders want to build their base, they should take a more active role in the community and show up. Be dependable, responsible, committed and above all, authentic. Don’t do it if it doesn’t feel right.

Organize fund raisers that appeal to every level of giving and engage your members in the campaign of your chosen candidate. Appeal to your union’s International. IATSE International President Matt Loeb stepped up in a big way and wrote a letter of support on my behalf to many of our locals, which resulted in several thousand dollars in donations to my campaign.

Knock on doors for your candidate and put a face to organized labor. I ran in one of the most conservative districts in San Francisco, where many voters viewed organized labor with suspicion. I had great support from the San Francisco Labor Council and affiliate unions who took turns walking precincts with me. The more we talked to folks, the more we converted them.

Consider this: on September 1, 2012, I polled third place with six percent of the vote. Ten weeks later, I came within 132 votes of winning the election.

Don’t know where to start. Think local. During the course of my campaign, I learned that the San Francisco Democratic County Central Committee (SFDCCC) wielded tremendous influence on the electoral process yet flies under the radar.

Labor currently has one elected member serving on the SFDCCC, Hene Kelly of the United Educators, but there certainly is opportunity for more representation. I encourage the AFL-CIO, local unions, labor and trade councils to begin strategizing and create actionable goals that will result in more representation for organized labor in elected offices.

Be patient. A big part of running for office is building name recognition and it may take more than one try to win. I had never run for elected office before and lost to a two-term school board member who was serving as its president. But I surprised many people by coming awfully close.

Next time, I plan to win.

A version of this blog first appeared on the AFL-CIO website.

How My Brother’s Passing Changed My Life