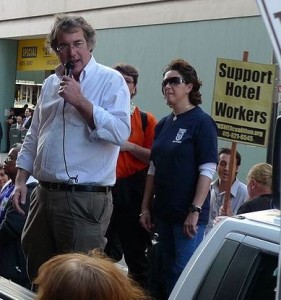 I posed this question to Mike Casey, the 19-year President of Local 2, UNITE HERE!, which represents about 12,000 San Francisco and San Mateo hospitality workers.

Mike has been at the forefront of the labor movement his entire adult life and has fought more than his share of battles. Currently, Local 2 is embroiled in a contract dispute with Centerplate, the vendor that provides food service at AT&T Park, home of the San Francisco Giants.

“We’re now at the end of our fourth season without a wage increase,” he says.

While the Centerplate struggle has attracted media attention, Mike tells me this is one of “six or seven fights like that going on right now.”

Anyone who knows Mike should have full confidence that he and Local 2 will ultimately succeed.

His track record includes a successful 73-day strike in 1994, which resulted in a contract with the Mark Hopkins Hotel. He also led seven-year battles to unionize the Parc 55 and the San Francisco Marriott hotels, and a nine-year crusade to reach an agreement with the Sir Francis Drake Hotel.

Mike is one of my favorites. He is as real and as committed a labor leader as you will ever find. He is patient and tenacious and a terrific speaker. He is also quick to deflect attention from himself and give credit to Local 2’s staff. “We have great staff, we have great rank and file leaders, we have a strong network of shop stewards and in-house committees.”

Mike brings a deep knowledge of labor history, which informs his discussions and shapes his vision for the future, a future that includes “tying our fortunes to sisters and brothers in other nations because it is the only way we’re going to win.”

Leading up to Labor Day 2013, I talked to Mike Casey to get his perspective on the state of our unions. Below is Part I of our discussion.

How has the labor movement changed over the last 19 years?

In our industry, there’s just been an incredible increase in the consolidation of hotel corporations. Hotels are no longer locally owned and operated. The days of the Swigs are gone.

There’s only one locally owned and operated hotel out of all the hotels we deal with in San Francisco, the Handlery. Everything else is private equity or they break it up into so many different ways now because the people who actually own the property don’t operate the property. And so you’re taking on more than just the management company whether it’s Hyatt or Hilton.

So who do you negotiate with?

In terms of the greater labor movement, I see a lot more diversity in terms of our actions and the ways that we put pressure on corporations. You know 20 years ago we never did the capital strategies stuff, going after pension funds.

The approach to going after employers is a lot more comprehensive than it used to be. You don’t just take a strike vote and put people out on the streets. We have to do a whole bunch of other things.

Like going after the owners, the people who have interest in other sectors of the economy. You put pressure on those sectors. Where’s the owner, where’s the operator likely going to want to grow?  If they’re trying to get a convention hotel in Boston, let’s try to impact that with the agency that’s making that decision.

The use of boycotts, social media and all the ways that we communicate now to customers–there’s a lot more to it than just handing out leaflets. So we have to be a lot more creative than we’ve ever been.

Do you think change is starting to take place with all the fast food worker strikes?

I think the movement’s going to become more global. Working people will realize that a handful, the one percent, continue to make nothing but money and we just continue to get crumbs or less.

You can see different uprisings around the world. I’m not just talking about political uprisings. (There are) uprisings in workplaces. I think it’s inevitable that we’re going to see more of that as power and money continue to be concentrated in those few hands. And people are going to stand up.

We get smaller. The non-union sector gets larger. And we’re not putting enough resources into organizing the unorganized. Until we make that turn as a movement, I think we’re going to see the continued concentration of wealth.

There are people that don’t do that well and yet they hate labor unions.

It’s very frustrating. When people hear that you’re fighting for fully-paid or very affordable health care, for your members and for your families, unfortunately, the average citizen looks and thinks initially, “Well, I don’t have that. They have something I don’t get. Why do they get that? Why should I support them to get something I don’t have?” Instead of thinking, “Hey, if they are raising the bar, if they win then that sets the standard and I may have a better chance when that happens next month.”

How do you change that?

We’ve really spent a great deal of time (in Local 2) talking about (how) we’re more powerful when we’re together. The other thing is–people in union hotels know what the conditions are because they have families and friends who all work in the non-union sector whether it happens to be restaurants, or other food service or hotels. They’re reminded of that all the time.

Where we have the struggle sometimes is getting people to apply their resources and the union’s attention in non-union organizing campaigns.

So do you think Labor Day is relevant?

I think May Day is more relevant. Labor Day is a throwback to the American Labor Day, which is fine. It’s the time to celebrate the American worker, but May Day is International Workers Day and we’re no longer an economy that’s solely contained within a region or even a nation. We’re a global economy and capitalists all see how to make the best of that global market. When are we going to learn how to put it to our use? Tying our fortunes to sisters and brothers in other nations is the only way we’re going to win.